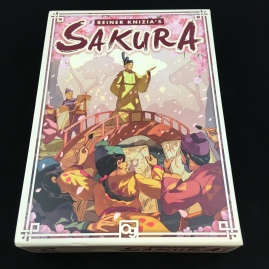 You are the paparazzi of medieval Japan — painters. Hiding behind bushing, sneaking around tree, jostling for position to get a quick sketch maybe even a watercolor study of someone famous. As you lay in wait behind the garden gates you hear the clink of an easel. The soft scrape of a gentle brushstroke. The deep husky breathing of an artist. You aren’t alone. Other painters have been tipped off as well. It’s Spring and the emperor is taking a walk. It’s time to get physical. In Sakura, players are painters hoping to get the best viewpoint of the emperor while he strolls through his garden admiring the cherry blossoms. Move too fast and you may accidentally bump into the Emperor and be sent packing in disgrace. Move too conservatively and you’ll be left in the dust when he strikes a stunning pose.

The goal of Sakura is to get as close as possible to the Emperor when he stops to admire one of three sakura trees on the board. At these spots, the closest player will score three points, the next player will score two points, the third scores one point. In 5 or 6 player games the fourth in line scores one point as well. After scoring, players queue up in a straight line behind the leader and start again. At the last tree, the person with the most points win. It would be simple except for one thing. If you land on the same space as the Emperor or dare pass him, you lose a point and get sent back three spaces.

Players have a hand of five cards. Each player secretly chooses one card and places it face down in front of them. Cards are then revealed and resolved by initiative order. Each card is numbered with the lowest going first. The cards have two actions to resolve: the top number (Garden Action) moves the Emperor or other players forward or backwards on the path. The bottom number (Painter Action) will move the player’s pawn forward or backwards on the path. Painters are territorial and never share a space. So when moving, you only count empty spaces towards your movement – and not those spaces occupied by other painters. So player position can change drastically over a turn.

Sakura is a silly push your luck game that manages to maintain its dignity. It is simple and easy to teach. The decisions are limited and with players restarting after every scoring space, no-one gets left behind. You need to  and succeeds with its simplicity. I was concerned after playing Osprey Games’ Star Cartel. Star Cartel was also simple but wasn’t much of a game. It felt instead like a solid mechanism in desperate need of a game to use it. But Sakura provides an experience with all it’s simplicity. You will spend 20 minutes jostling around, making hilarious mistakes that are completely unavoidable, and then line it up to go again. Luck can change quickly but you will have enough fun that you won’t care too much about the outcome. 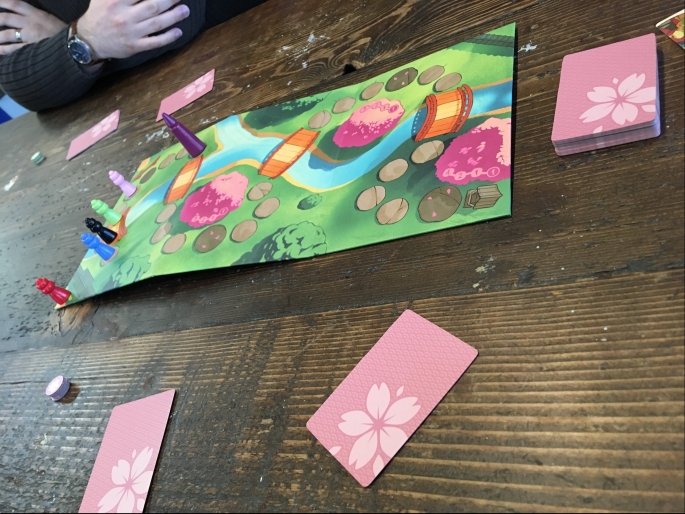 Herbaceous is a simple set-collection card game where players are competing to pot herbs by strategic placement, and the swift collection, of sets of cards. Each player has exclusive access to their personal herb garden and shared access to a community garden. The only thing that could make this any more country is if Mary Berry came in, poked my herb biscuit, and then commented on my subtle (but well-formed) layers.

English baking aside, the turns are simple. They consists of two parts: First, a player can optionally pick up herbs from both their private and/or the community garden and place them in one of four containers for points. The only restriction is that every card picked up must be potted into the same container according to that container’s specified restrictions. Each container can be filled up only once so players need to be wily when they decide to pot on their turn. Remember kids, please pot responsibly.

After taking the option potting action (or not), the player must plant some herbs. They will draw a card and place it face-up in either the community garden or in their personal garden. Then they draw a second card and place it in the location not chosen. Basically, at the end of a turn, one card is in the communal garden and one is in the personal garden. In the team version of the game, three cards are drawn with cards placed in the community garden, your private garden and one card is placed in your partner’s private garden.

The goal is to fill as much of your containers as possible. Each player has the same set of four containers: The Glass Jar can fit three herbs and is the only place to pot the Special Herbs which provide bonus points and ownership of the prestigious Herb Biscuit; the Small Pot can collect 1-6 different pairs of herbs; the Wooden Planter can accommodate 1-7 different herbs; and the Large Pot fits 1-7 herbs of the same type. The game ends when everyone fills their pots and/or are unable to pot anything. You score the amount of potted herbs for each container, any bonus points from the Herb Biscuit and special herbs, and one point for each unpotted herb in your personal garden. The Herb Biscuit is awarded to the first player to get the three special herbs (Chive, Mint, and Thyme) potted in their glass jar.

Since it will be mentioned at least once during a session of this game, none of the herbs in the game are hallucinogenic and the bonus Herb Biscuit is not *that* type of edible. But this would be a wonderful expansion to the game if each player could have a secret garden where they grew … other things.

Herbaceous is a delightful combination of gentle push your luck and set collection. It thrives in low light and casual environments. It doesn’t ask too much from you and you don’t really want too much from it. Set collection is a slightly overdone game mechanism and I am surprised that it works so well here. If it were too simple, it wouldn’t be engaging but just barely ramping it up with the different containers made it more compelling. It also paired nicely with the push your luck mechanism. Players will be aware of which pots the competition is going but someone snagging a couple of the cards you want will slow you down without completely wiping you out. It is never overwhelming an overwhelming experience with most games ending with a fairly tight spread of points.

You are making very simple decisions. Do I want to pot right now? y/n. Then the decision is simply community garden or my garden. That is it → Pot? y/n and then My Garden? y/n. This entire game hinges on those two questions. Additionally, my version of the game came with three Flavor Cards (Peppercorn, Cinnamon, and Star Anise) which when added to the deck provide some additional actions when pulled. These were meant to ramp up the player interaction. However, the game didn’t need them and I prefer to play without them.

End of the day, Herbaceous is a welcoming and simple game with amazing artwork that plays well for emerging gamers but will likely bore most experienced ones after a couple of games. The slim ruleset and easy mechanisms will attract new players and the quick gameplay requires minimal investment. While the gameplay is fine, it would shrivel up and blow away in the wind without Beth Sobel’s delightful artwork. Her work can be found in some of my favorite Stonemaier Games such as Viticulture and Between Two Cities. It matches the theme and fits the mood of the game perfectly. The warm colors and breezy hues give the game a relaxing appeal. The game would be unpalatable with any other artist.

A group of poor explorers. Unlimited riches. Untold Danger. Oink Game’s “Deep Sea Adventure” and “Troll” both play with these themes. They are quick to learn and play. They have minimal components and look gorgeous on a shelf…but, despite the packaging, are they any good?