Everything is getting too crowded. You thought you had enough room but you are, after all, bunnies and you've proliferated yourself into an environmental catastrophe. Now to survive, you need to expand into new lands to build a new BUNNY KINGDOM.

In Bunny Kingdom, designed by Richard Garfield and published by Iello Games, players draft hands of cards in order to control territories, construct buildings, and gain end game conditions to earn points (ahem…golden carrots) for their Bunny Kingdoms. It is basically a PG-rated Watership Down meets Small World with card drafting and no violence.

The board is a 10×10 grid with a large score track. Letters A-J form the rows and numbers 1-10 form the columns. Forests, fields, seas, mountains, plains, and a couple of starting cities are available for players to control. Some territories will produce resources (forests produce wood, fields produce carrots, and seas produce fish) while others produce nothing. A deck of 180 cards is placed next to the board. Cards include 100 Territory Cards corresponding to every space on the board, Building Cards that can be constructed after the drafting phase and Parchment Cards that provide additional opportunities to score points at the end of the game. 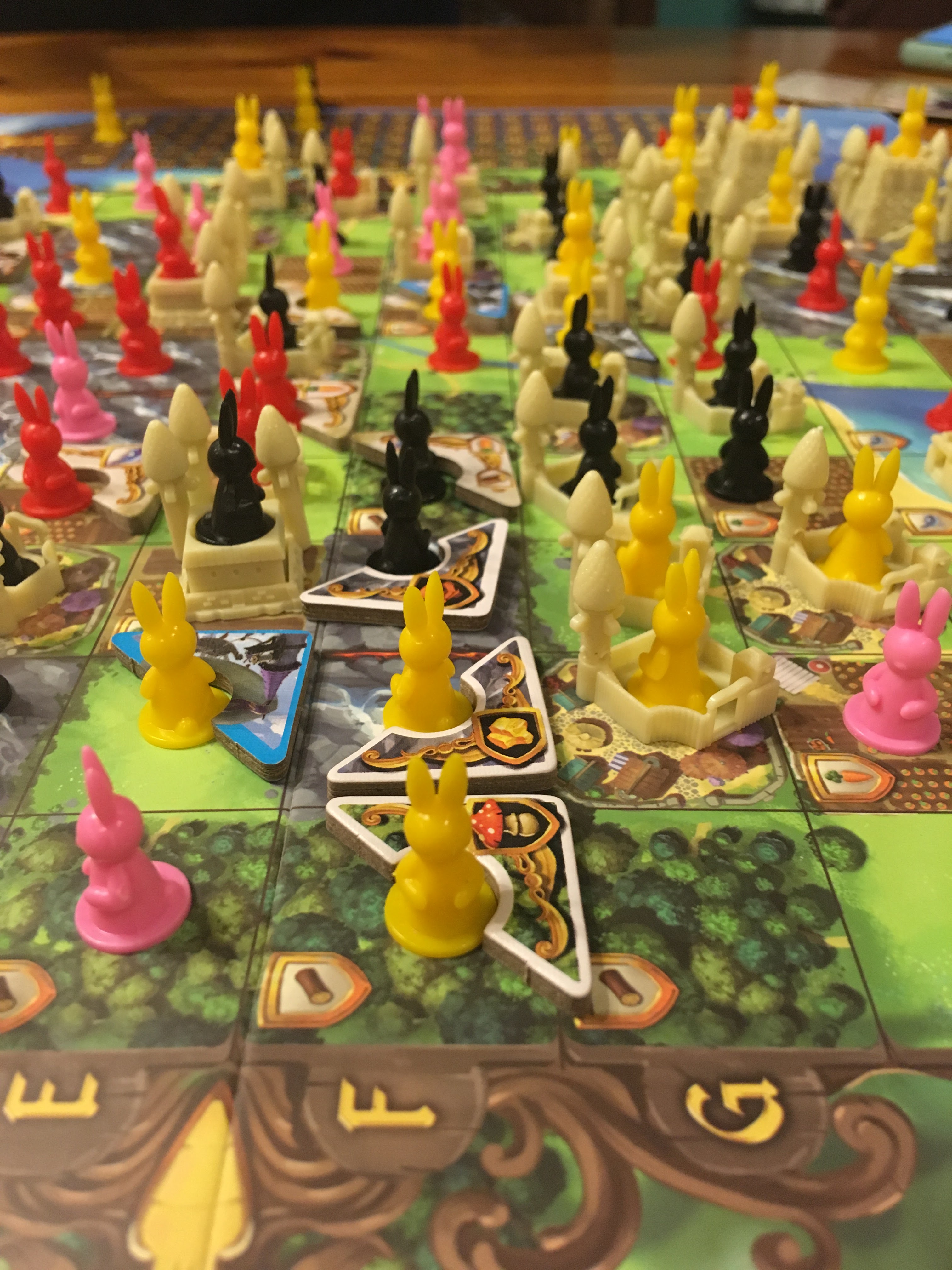 Bunny Kingdoms is played in four rounds each split into three phases: drafting, construction, and scoring. At the start of the round, players are dealt 10 (or 12) cards. They choose two cards simultaneously and place them face-down. Then pass the remainder to the player on their left or right depending upon the round. The chosen cards are revealed and resolved. Territory Cards and Building Cards are resolved immediately. Parchment (scoring) Cards remain face down and secret until the end of the game.

To resolve a Territory Card, a bunny is taken from the player’s supply and placed on the corresponding coordinate space on the board. Think the coordinate system in Battleship with rows A-J and columns 1-10 (F6, G1, A5, and so on). To resolve a Building Card, take the corresponding building token from the supply and place it on the card in front of them. There are a variety of buildings. They can produce resources, upgrade or build a city, connect two disparate fiefs, and set up a camp to (temporarily) claim an unoccupied area. Buildings can be constructed during the building phase of the current or any subsequent rounds so they do not need to be constructed immediately. Each territory can only support one building and, other than the camp card, players need to control the territory first before building on it.

Once players drafted all their cards, the construction phase begins. Buildings played during the drafting phase can now be constructed. Most buildings are constructed by moving a token to a controlled territory. However, when someone states they are building a camp, you must check first to see if another player has a camp to build. Each camp has a numerical value and the player with the camp of the lowest value gets the option to place theirs first. There are also Sky Towers which allow you to build towers in two remote fiefs in order to join them. These are amazingly beneficial.

After players construct which buildings they wish, everyone scores their fiefs. A fief is a single set of connected territories controlled by one player. Basic end-of-round scoring is completed by multiplying the wealth of a fief by the strength. The wealth of a fief is the number of different resources produced and the strength is the total number of city towers. So if a fief had a wealth of 2 (say, they produce carrots and fish) and a strength of 3 (they have one 3 level city) then they score 6 points for the fief. 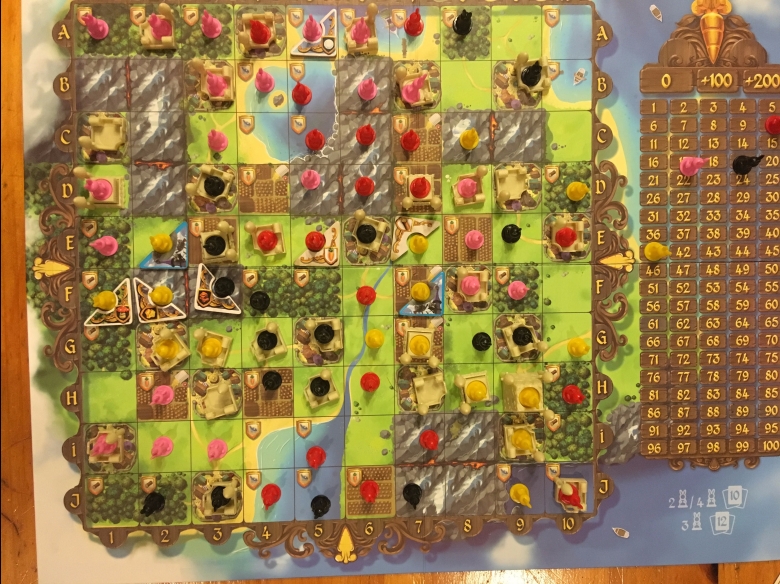 Four rounds of drafting, building, and scoring take place and then players will do a final scoring where Parchment Cards are revealed and the results are tallied. There is a large diversity of end game scoring possibilities to explore so prepare for a slog and the end of the game.

Bunny Kingdom is a well designed and developed game. This is not surprising coming from the team up of veteran designer Richard Garfield and the artistic powerhouse that is Iello. The mechanisms are streamlined and simple so the teach is fairly easy — Draft two cards and then resolve, build, score and repeat four times. It does, however, lead to a very messy tableau of discarded Territory Cards, pending Building Cards, face-down Parchment Cards, and passed hands. I’m disappointed that no effort was made to create a player’s aid to help organize all these cards. Every game has had some confusion where cards were muddled up requiring time to work out what happened.

The decision space is comfortable with plenty of opportunities to build or modify your strategy. It provides a pleasurable tension without too much of a strain due to too many options being available. Everything looks good in your hand! There are so many possibilities. I need that but they need that other one and I could do this because I have that but maybeeeee. It is, however, just as random as you can imagine when drafting 120/180 cards. You may not get what you need to complete the strategy so you have to adapt and sometimes you just can’t. If the thought of that doesn’t appeal to you then this is definitely not your game.

The pacing of the game is erratic. To be fair though, this is an issue with most drafting games. Some players will quickly play and pass and others will agonize over choices. However, experienced players will likely be able to burn through the drafting portion of the game quickly after a game or two. The real choke point is the scoring. End of round scoring is a trial and end of game scoring is a travesty. It wrecks the game for me. The setup is easy. The teach is easy. The gameplay is simple. The scoring grinds everything to a halt.

Iello developed a beautiful game though. They took a solid set of mechanisms with a potentially bland theme (the original theme of the game was Dwarven Roads) and completely turned it around to make something exciting and buzz-worthy.  Interestingly the most interesting element of the game seems to have gone relatively unnoticed — the area control in Bunny Kingdom works entirely without any player interaction. The only possible exception is when two or more players have camps to build. And this is a redeeming design element of the game. It is, for the most part, a very friendly area control game which seems counter intuitive to the mechanism but it does work.

The artwork and the idea of bunnies proliferating over the board is also whimsical and wonderful and I love it. I loved it the moment I heard about it. My only wish is that they could proliferate faster and make less of a mess around the board.

Bottom Line: Bunny Kingdom is a beautiful, albeit messy, “second-step” drafting game. Fans of Sushi Go! can move into a larger decision space. Fans of 7 Wonders can find enjoyment in a similar level of complexity but with an added element of area control. The art is delightful but the small board size and lack of player aids makes for a very clustered and unnecessarily chaotic experience. The drafting is spot on and the area control is the friendliest in the land. There are just enough tempting decisions to make it difficult to decide whether to continue on one strategic trajectory or start a new one. 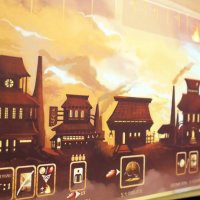 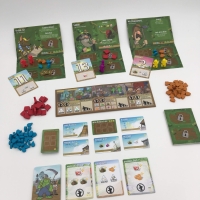