In Tesla vs. Edison: Duel, now up on Kickstarter, you take the role of a notable inventor of the era battling for control over three regions – New England, New York, and Out West. These regions are controlled collecting stock shares, complete projects for each area, and racking up your propaganda. The game is played in three rounds. At the end of each round bonuses are gained for control of each region and at the end of the third round you tally up your points and the player to control the majority (2 out of three 3) of the regions, wins.

At the beginning of each round players draft a hand of three Assistant cards. Depending on your inventor’s instant win condition and your own strategy, you choose a card and pass the remainder to your opponent. You continue picking and passing until you have a completely new hand. These assistants are historical figures has two abilities that can take when you play the card. They can allow you to claim projects, acquire stocks (or sell one for a free action),  advance a technology (you steal a tech from your opponent), increase PR, or limit a region to AC or DC (which limits which projects can be claimed to an area).

On their turn, each player takes a turn and plays a card in front of them. That card has two actions. You can take those actions plus any free actions in whatever order you wish. Free actions are earn by selling stock or hitting certain PR achievements. Once all cards are played, you tally up points for each region in a specific order (New England, New York, Out West), the player with the point majority in each region gets a bonus which can affect the majorities in the following regions. Then check to see if the instant win for either player was achieved.

I’ve been on a roll lately with two-player games and am nearly at the point of saturation. But since Tesla vs. Edison: war of the Currents was one of my best games of 2015 I was excited to try their two player version. Artana Games (formerly Conquistador Games) always excites me with their innovation and JR Honeycutt (who I still think should design a M.A.S.H. game) is amazing, so I’m game.

First off, if you expecting something as deep or intricate at the original Tesla vs. Edison: War of Currents, you will be disappointed.  Just like another popular “duel” game {ahem, 7 Wonders} it is a very different game from it’s progenitor. It is very much the younger sibling — shorter, simpler, and adorable. While War of Currents can be slow and ponderous, Duel is quick and whip-fast. The decisions space is limited in comparison but that limitation makes those choices tense and meaningful. There is a nice push and pull as you can you vie for ownership of the three regions, associated technologies and much needed stock shares, and the no AC/DC are vicious. I particularly like the ability to quickly snag technology. This can be devastating to your opponent if you pay close attention to which stocks they are collecting and a good memory of the cards drafted. 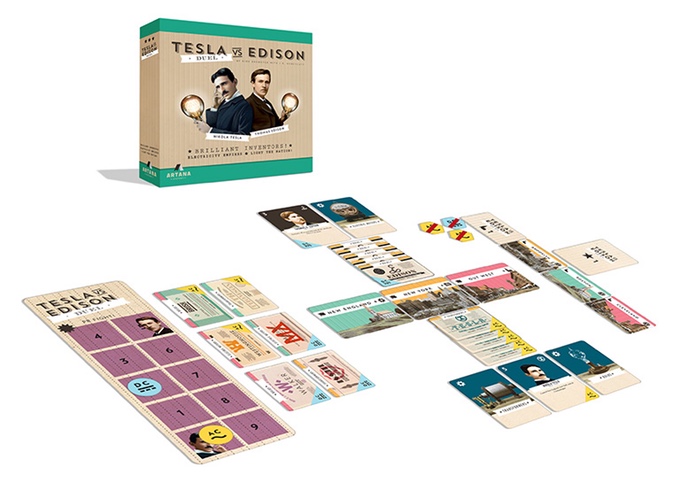 In the review prototype I played, I only had Edison or Tesla to choose from but I really liked the addition of their individual instant victories. Without these, you get a simple set collection, area majority game but by adding these requirements, you need to be acutely aware of exactly what your opponent is doing and work accordingly. Interestingly, this came out mostly in the card drafting element at the beginning of each round. Know your opponent, know your skills and draft accordingly. It added most of the strategic bulk to the game.

Iconography is simple and the card design is wonderfully easy to parse with new players. It sets up faster than 7 Wonders Duel or Agricola: All Creatures Big and Small and plays quicker. I do think that some individual player powers would have been a nice addition or variant to the game and is a missed opportunity. That said, I have enjoyed seeing some of the development of this game where mechanisms and iconography have been streamlined while maintaining the same level of strategic depth.

Tesla Vs. Edison: Duel is already funded so get on board now.