In They Who Were 8 (BGG, Amazon), players are competing bards recounting the glorious (or inglorious) tales of their gods. However, they are playing favorites and want to bring glory to their gods and infamy to all the others. They also don’t want to be too obvious about it. Bards, amiright? You can never trust them.

Before we dive too deep into the gameplay let us gather and discuss the two different variants: The team variant and the competitive variant. To start with, let’s just put it out there that you can skip the four player team variant (Pantheon) where your team is going right at the glory and singing the praises of their chosen gods and besmirching the memory of the rest. While I do bemoan the lack of good team games out there, it is far too simple for experienced gamers (you will get bored quickly. If you have new or emerging gamers, it may be fun for a couple of plays. But the meat of the game lies elsewhere.

In the competitive, non-team variant (Titanomachy), each player has two gods they want to praise, one between them and each of their neighbors, leaving two gods between each player. To win, you want one of your shared pair of gods to get the most glory but, humbly, you want your god to have the least amount between the two. This creates an interesting push and pull between your “partner” and yourself. You want to get all that delicious glory but you also want to keep the story interesting by perhaps dropping a bit of infamy to your deity.

This sort of adjacency play is so intriguing to me. It shines in games like Between Two Cities by Stonemaier Games and Isle of Monsters where your actions directly affect your neighbors and indirectly affect everyone else. It makes your relationship between other players vary dependant upon their placement at the table. You need to play a much more subtle game with your neighbors while it is a straight-on battle with everyone else.

So, for the best experience of They Who Were 8, go for the Titanomachy variant first and save the Pantheon variant for team play with new gamers. Now, on to the rules.

Each player starts with three cards and on your turn you will play one. The card played will add, remove, or swap glory or infamy tokens from the gods on the table. Cards are quite specific about which players’ gods are affected. Depending on the card, the effect will target the active player, the non-active players, or all players. The card actions will add, remove, or switch tokens (glory or infamy) on the player’s gods. Additionally, for the cost of one infamy, each god tile has a special ability that can be activated once per game.

Once each player plays a card, hands are passed to the player on their left. The discards are shuffled back into the draw pile and player draws back up to three cards. This continues until one of the piles of tokens (infamy and glory) are emptied.

In the end, you are trying to knock up the scores of certain gods while lowering the scores of others by adding/removing glory and infamy. Specifically, in the non-team variant, you want to be the lower scoring god in the highest scoring god-pair. The tricky part is ensuring that your deity comes in second in the highest scoring pair. You are basically going for second place and that is something delightfully novel.

One area that is frustrating about They Who Were 8 is from the premise of the game (competing bards) it seems you are going to play a storytelling game but, in the end, it is an abstract strategy card game. Much like …and then we held hands it is a game that hides its abstract roots behind evocative art and graphic design. The minimalist design and ease of play allow for a wide range of players with even the less interesting team variant playing a role in decreasing the difficulty for new players. Unfortunately, there is very little connection between the bardic theme and the enjoyable game play. The designer missed an opportunity in including a slight storytelling element. The mechanics of moving tokens from one tile to tile through card play is simple enough that an extra layer of storytelling would make it more thematic and engaging without increasing the complexity. So, while the strengths of the game is similar to …and then we held hands, it also possesses the same letdown. I wanted something emotionally satisfying and instead had an abstract game.

They Who Were 8 provides an interesting setting with simple game-play. It is interesting enough for me to forget the lack of storytelling and allow it to sit alongside Hanabi as a go-to card game for emerging gamers, and filler for a couples game night. A small game with no story but plenty of soul. 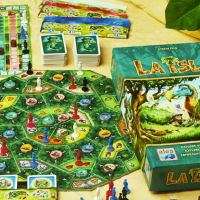