Tides of Madness (BGG, Amazon) is the spiritual successor of 2015’s Tides of Time (BGG, Amazon). It is small drafting and set collection card game where 2 players pass a hand of cards back and forth, choosing one and passing the rest. There are a few changes to the game including a shiny, new Lovecraft theme and the addition of madness tokens which can accumulate during the game through the playing of certain cards.

Tides of Madness consists of a small 18 card deck, twenty tokens, and a score pad. Each card has an ability (such as a scoring objective) and can be suited or unsuited. The suited cards come in five suits of three cards each: Races, Locations, Manuscripts, Outer Gods, and Great Old Ones. This leaves three cards unsuited. We’ll get back to the these three cards later.

The game is broken down into three phases: A Drafting Phase, a Scoring Phase, and a very brief Refreshing Phase. During the Drafting Phase, each player draws five cards from the deck, chooses one card, and passes the remainder to the other player. Both players simultaneously reveal their cards and the drafting continues until no more cards are left. Then the Scoring Phase begins with each player scoring the cards in front of them. Each card has a scoring objective at the top. Read it and then see if you meet the conditions to earn points. Cards with tentacles framing them (8 cards in the deck) are also tallied up and madness tokens are handed out — one for each tentacled card. While you can lose by having too many Madness tokens (9 tokens at the end of a round will tank the game for you), the player with the most at the end of a round either earns four points for being so daring or gets to discard one madness token. Then, during the Refreshing Phase, each player chooses one card to keep in play for the next round and one to remove from the game. The deck is shuffled and five cards are dealt to each player and the Drafting Phase begins again. After three rounds the person with the most points wins.

The drafting in Tides of Madness is perfectly solid. It is the same as used in Tides of Time. If you are not familiar with Tides of Time, you can compare it to the drafting mechanism found in Sushi Go or a much streamlined version of 7 Wonders. The strategy is simple. When you get a hand of cards, look at the cards already played by your opponent. Then determine which cards may be helpful to them and either choose them to remove them from the deck or find something that fits with your currently played cards. What really shines in Tides of Madness is the push you luck element introduced with the madness tokens. Eight cards in the deck are framed by tentacles which when played will score you points for having a majority in a specific suit. These cards will generally earn you more points than other suited cards but they come with a price — you also earn a madness token. If you accumulate 9 you will go mad and lose the game. But if you have more that your opponent you get a bonus! 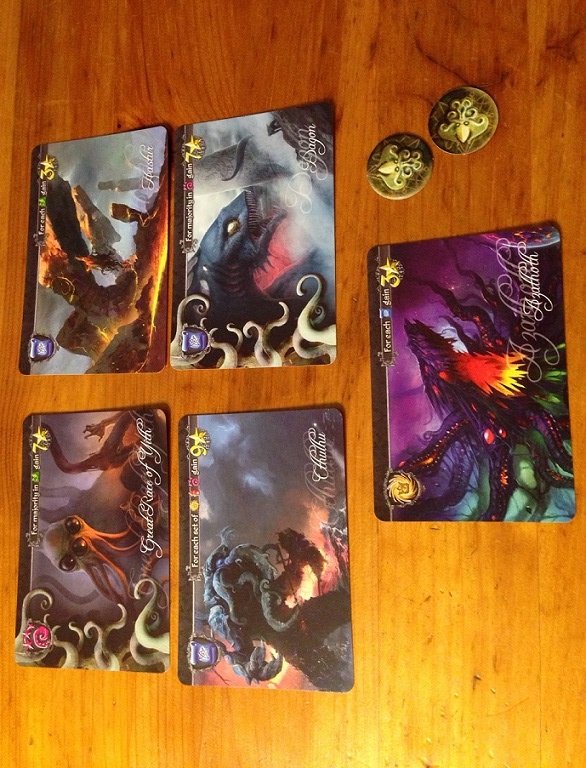 The tension also ramps up will across the three rounds. The first round is completely open and easy. But as you accumulate madness and retain cards in front of you, the decisions become tighter and by the third round you are sweating over which cards to play. But tense as it is, it only lasts 20 minutes so it never overstays it’s welcome or burns you out.

In addition, the unsuited cards provide some interesting abilities. The Miskatonic University card gives you four points for each majority you have in all the other suits and the Shub Niggurath card doubles your points from your last played card. The Dreamlands card is wild but you take a madness token from your opponent. But my favorite is the Necronomicon which, while a suited card, does something different by giving you points for each Madness token in your possession (but, of course, it is the Necronomicon so it earns you a Madness token to boot).

Overall, if you like the drafting in Sushi Go! (and that one should be in your collection already) and 7 Wonders and didn’t find the pyramid tower of cards a suitable replacement in 7 Wonders: Duel then Tides of Madness is great fit. It provides a nice, tense back and forth between the players and the press your luck aspect of the Madness tokens adds an additional layer to the game that is missing from Tides of Time. The only issue for the library space is the theme. While I am a fan of Lovecraft and the Cthulhu Mythos, it is potentially off-putting to emerging gamers or new players. They will most likely not know who Nyarlathotep is and will have no idea what the Unaussprechlichen Kulten is. Not that you have to know these things but for a theme to be attractive, a person generally needs some background in the source material. In Tides of Time, you are building up a civilization. It has a more approachable theme.

Unlike many microgames, Tides of Madness doesn’t overextend itself into larger players counts. It provides a nice streamlined game that packs a nice, albeit small, thematic punch for two players.

My suggestion is if you are shopping for your library and have room in your collection for a two player drafting game, start with Tides of Time — it is inexpensive, simple to teach and the ancient civilization theme is probably a better fit for a large range of gamers. If it is successful then move to Tides of Madness. If you are looking for a quick, tight, drafting game for your home collection or if your patrons are already fairly gaming-savvy, then go directly to Tides of Madness. It is a fantastic pub game, and certainly a decent nerd date night game.

One thought on “Board in the Stacks: Tides of Madness”